House rules of the Hyborian Age

Everyone can backstab
World of the Hyborian Age is not a place of chivalry and honor. Everybody will do everything to eliminate his opponent by any means. In  game terms this translates to the ruling that if someone can attack his opponent from behind he gains +4 bonus to hit. If the attack roll succeeds, the opponent should make a saving throw vs. death, if he fails, he dies.

Critical Hits and Fumbles
When someone rolls natural 20 or 1 on an attack roll he has scored a critical hit or fumble respectively. Critical hit allows to roll damage dice as long as the to hit roll is succesful. When fumble occurs, the player gains -2 penalty to the AC for the next round.

Opportunity Penalty
The opportunity penalty can be applied when a spell is being cast, someone rolled a fumble or moved for the whole round.

Unarmed Attacks
Brawling attacks, such as those conducted with fist, foot or dagger pommel, will normally inflict 1d2 points of damage, plus the attacker’s Strength bonus to damage.

Death
Character dies when his HPs are reduced to 0-his level.

A full rest of 8 hours restores one HD.
Once a day character can drink booze to restore 1d6 of HPs.

Sanity Points and Insanity
Every character has sanity points sum equal to his wisdom score. Everytime character experiences something, gruesome, terrible Referee should  call for a saving throw. If character fails the saving throw he must substract d6,d8 or d10 sanity points(at the discretion of the Referee) from the SP sum. If it's reduced to 0, the character is completly insane and is under the control of the Referee.

As per LotFP rules.

Spellcasting roll
Magic in the Hyborian Age is a dangerous endavour. Dealing with demons and other cosmic entities can cause insanity or even death. To reflect this, everytime sorcerer casts a spell he must make a saving throw vs. magic with penalty equal to the level of the spell that is being cast.

Nomads hail from very different ethnic groups such as hyrkanians, turanians, shemites. Many of them are Kozaks. Experts at riding horses and horse archery.

Horse archery: No penalties while shooting the bow while on horseback.

Born in the saddle: No penalties to HD roll after rest on horseback.

Expert archer: +2 bonus to either hit or damage roll while using bow. This does not apply while on horseback.

Saving throws: Nomad gains +1 on saving throws vs. death and poison.
Posted by M.P. at 6:16 PM No comments:

I'm working on the map of thurian continent only with locations mentioned by R. E. H., here's first w.i.p.: 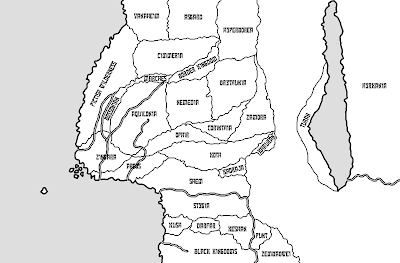 Well to emphesize some themes characteristic to the Sword & Sorcery genre, I've decided to make a list of things that characters can do to gain experience.

Experience for Fighting
Gaining experience from fighting is achieved not only when the adversary is killed, but also when the combat was avoided.

Scoundrel is a person, who by either his wit, charm or steel gets what he wants.

Charm: Swashbuckler has a +2 bonus on reaction rolls while dealing with the opposite sex.

Information-gatherer: Scoundrels are well-rounded in social interactions, thus they roll twice on rumor tables when gathering them. Also they can try to obtain useful knowledge about people, their whereabouts and secrets by making a saving throw by discretion of the Referee.

Saving Throw: Scoundrel gains +1 on dexterity-based  saving throws.
Posted by M.P. at 2:57 AM No comments: 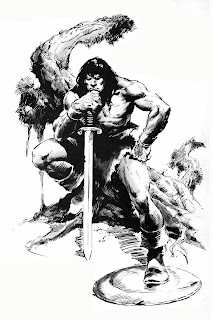 Hit Dice: 1d8/level(gains 3 hp/level after 9th)
Armor/shield permitted: up to chainmail, shields
Weapons permitted: Barbarian is proficient with one and two handed swords, one and two-handed axes, mauls, maces and Spears

Acute senses: Barbarian can be suprised by Animals Only on 1 on d6.

Barbaric Fury: If barbarian loses half of his hit points barbarian goes berserk achieving +2 to attack roll in a melee attack, and -2 to AC for rest of the encounter. He cannot use distance weapons, nor do anything else except engaging in melee with closest enemy in that encounter.


Superstitious: Barbarians are a superstitious folk, frightened of all things magical or unnatural; they receive a -2 penalty when making a saving throw vs. magical effects.

Saving Throw: Barbarians are very tough folk and get +1 bonus while making a saving throw vs. death and poison.
Posted by M.P. at 2:05 AM No comments:

Here's my new character sheet for the Hyborian Tales Campaign: 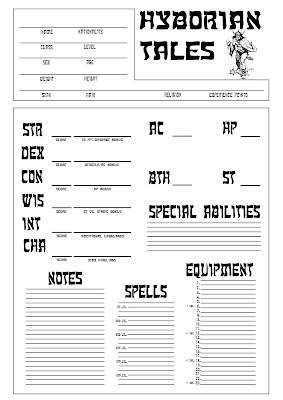